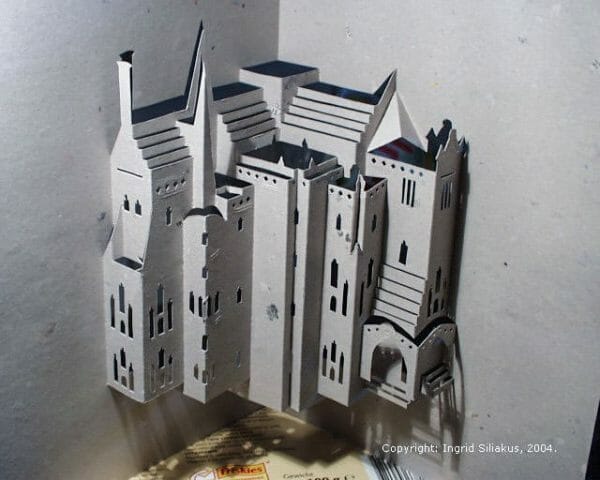 An original paper sculpture design by origamic architecture artist Ingrid Siliakus, based on the work of Antonio Gaudi.

These pieces are beautifully laser-cut and hand-scored, folded, and assembled. Each piece is signed by the artist and mounted onto an integrated backing card.

Folded flat, they measure 15 by 21 centimeters.

More about the Episcopal Palace of Astorga

Built at the turn of the 20th Century, famed Catalan architect Antonio Gaudi’s Episcopal Palace of Astorga is a neo-medieval edifice in a style known as Mordernisme. Built of gray granite, it features elements characteristic of Gaudi’s later works including arched entrances with buttresses and chimneys integrated in the side façades.

Having received the original commission for the structure from his friend, Bishop Grau, Gaudi came into conflict with the council after the bishop’s death and, resigned. The palace was then completed by Ricardo Garcia Guereta in 1915.

During the Spanish Civil War, the palace served as the headquarters for the Falange, the party of Franco’s dictatorship.

The Palace is now a museum of religious art, known as the Museo de los Caminos.

Be the first to review “Episcopal Palace of Astorga” Cancel reply