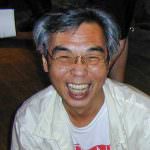 Born in 1934 in Hiroshima (Japan), Masahiro Chatani was a Certified First Class Architect widely credited with inventing the style of paper art known as origamic architecture. He grew up in Tokyo, graduating from the Tokyo Institute of Technology in 1956. He later became a professor there, advancing to full professor in 1980. This is approximately when he began designing origamic architecture style pop ups.

His legacy includes a large collection of original pop up card designs, over a dozen pattern books and, myriad students and enthusiasts who honor and continue the style he defined.

We are happy to be able to make some of his designs available as commercially die-cut cards, produced under the supervision of his daughter, Aya Chatani (a talented origamic architect in her own right).